The Americanism Program of Service promotes pride in our country, appreciation for the freedoms granted to American citizens, and gratitude to the men and women who serve/have served in the Armed Forces. Americanism celebrates the country’s rich, unique heritage and inspires unity from coast-to-coast. The Exchange Club of Albany, supports Americanism by supporting  the following local community   projects. They are Veterans Luncheon , Crime Prevention, Luncheon, Dougherty County Sheriff’s Office Youth Program Luncheon, Fire Prevention/EMT Luncheon,  Milestones of Freedom. We support the National projects  in our community .  They are Freedom Shrine, Give a Kid a Flag to Wave, One Nation Under God, Proudly We Hail

e Freedom Shrine is an impressive, permanently mounted collection of 30 of the most important and historic American documents, including the Declaration of Independence, the Constitution of the United States and the Gettysburg Address. They show our nation’s youth the strength and courage of their forefathers by allowing them to read, with their own eyes, the immortal words of inspired Americans who so decisively changed the course of history.

Exchange would like to see a Freedom Shrine installed in every junior and senior high school in the nation. Freedom Shrines have also found places of honor in universities, libraries, state capitols, airports, city halls and other public places where they can be studied and admired. To view a virtual Freedom Shrine, visit the Virtual Freedom Shrine website, hosted by the Exchange Club of Salem, N.H.

Developed by the National Exchange Club, the Freedom Shrine originated from the Freedom Train that toured the nation in 1947 carrying an exhibit of historic documents. The purpose of the Freedom Shrine is twofold. It puts before young Americans proof that the freedom and greatness we enjoy today were not purchased easily and reminds them that these gifts must be cherished and protected. Painstakingly researched to guarantee absolute authenticity, the 28 historical American documents that comprise the Shrine were carefully chosen to exemplify the beginnings of our nation and those subsequent turning points of importance which shaped our national character and eminence. The documents of the Shrine, although culled from the past, represent foundation stones which permit the present, as we know it, to exist and the future, as we dream it, to be attainable.

Thousands of Shrines have been dedicated throughout the United States and Puerto Rico in universities, libraries, schools, state capitals, city halls and at American outposts scattered throughout the world.

The Shrine is a display of historical documents photographically reproduced from the originals and permanently laminated to individual non-warping plaques. It is used by teachers, students, study groups and other clubs to further study American history. Exchange prints a study tool called the Freedom Shrine Documents Textbook which contains the texts of the documents of the Shrine. It can be used to inspire essay and speech contests, and to prepare for the Milestones of Freedom quiz. For more information on Freedom Shrines, request a free kit from your National Headquarters 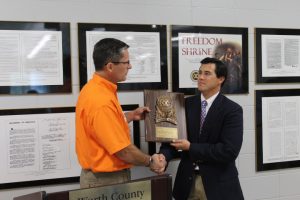 Give a Kid a Flag to Wave 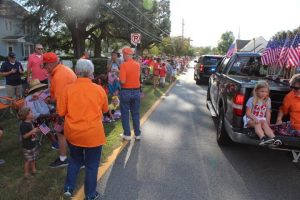 Give a Kid a Flag to Wave

The Exchange Club of Albany currently gives out Flags during the National Peanut Festival Parade in  Sylvester, GA., the Lee County High School Homecoming Parade and the City of Leesburg Christmas Parade. Just as its tongue-twisting title suggests, this popular projects involves the distribution of small American flags to youngsters at parades, fairs, picnics, school events or other community happenings that generate large crowds. The flags are absolutely free to the children and can make a great souvenir of the occasion.  Giveakidaflagtowave was developed by the Exchange Club of Galesburg, Il.

One Nation Under God

One Nation Under God

This powerful program not only aims to increase appreciation of our rich religious heritage, but also seeks to remind Americans that we must always trust in a higher power for guidance, protection and strength. The famous words of the program’s title are, of course, taken from the Pledge of Allegiance to the Flag. One Nation Under God Month is observed annually during November. Exchange Clubs can implement this program in a variety of worthwhile ways, such as organizing community-wide prayer breakfasts, distributing pamphlets describing the American Flag’s history and proper flag etiquette, sponsoring One Nation Under God essay or poster contests in schools and encouraging attendance at religious services.

The One Nation Under God project was adopted on July 30, 1964, by Exchange leaders seeking to heighten awareness of our rich religious heritage. November, observed nationally as One Nation Under God Month, is a special time of year when Exchangites join together to increase public appreciation of the important roles religious faith and freedom have played in our nation’s history. This page contains a variety of simple but effective project ideas that will enable your Exchange Club to help remind all Americans of our religious freedoms. Also keep in mind that although November is One Nation Under God Month, these suggested projects can be equally effective at any time of the year.

The aims of the program are to:

Build greater respect for the Pledge of Allegiance;

Promote increased use of the Pledge in schools and at public gatherings;

Combat all efforts to remove the words “under God” from the Pledge; 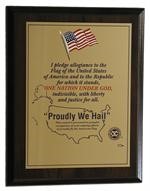 No symbol better signifies our nation’s greatness than our American flag—the Stars and Stripes. The Proudly We Hail program encourages regular display of the flag by individuals, commercial establishments and industries. To honor them a specially designed plaque is presented at a club meeting. This outstanding program promotes Americanism as well as community recognition by the  Exchange Club of Albany.

No posts to show!